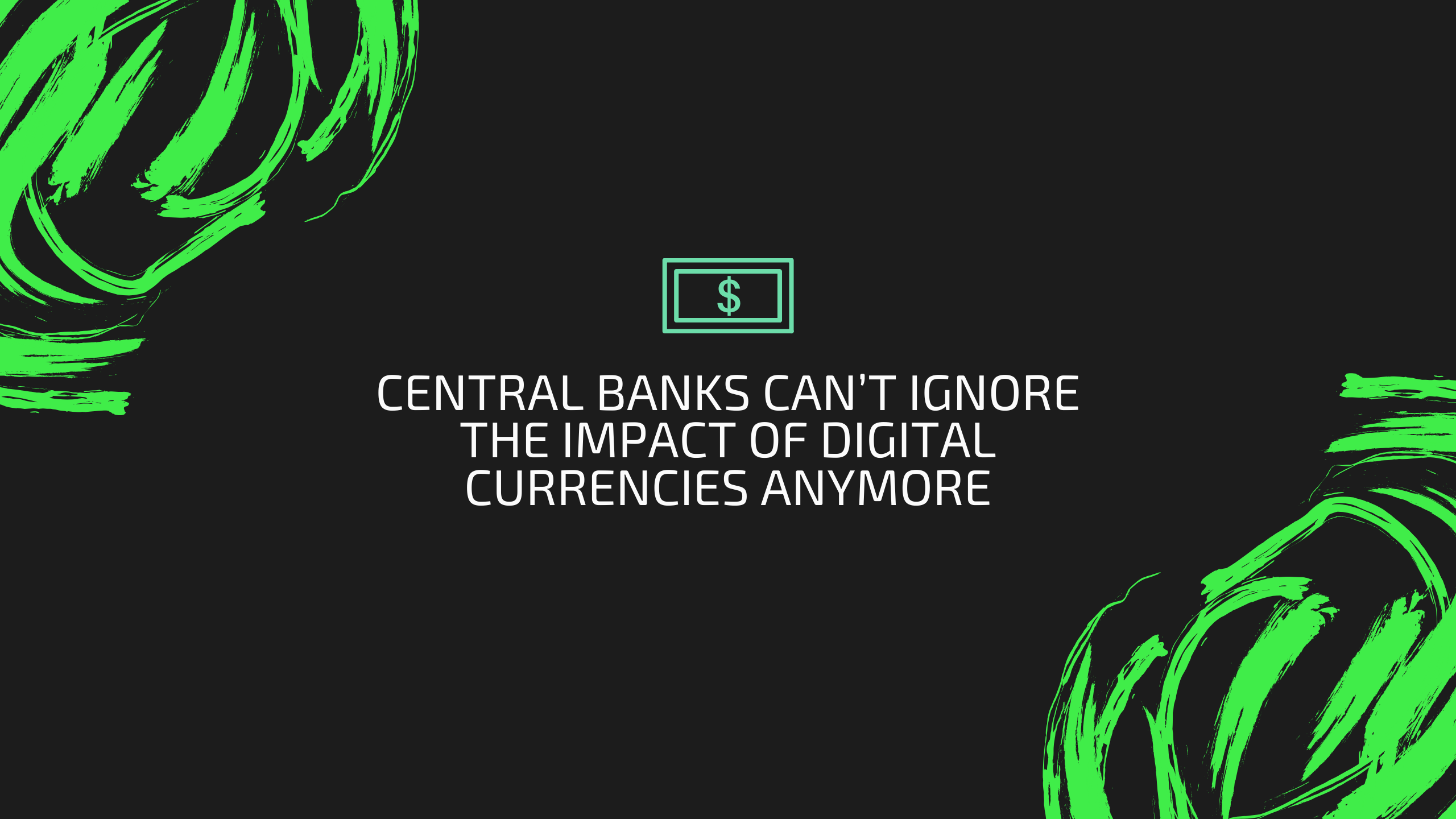 Although the price action in digital currencies in Q3 has disappointed the Crypto bulls, the mainstream adoption of digital assets has continued to gain traction throughout the year. While financial regulators around the globe are still perplexed on how to deal with this new asset class, the central banks are beginning to cozy up to the idea of issuing their own CBDCs (Central Bank Digital Currency).

Last year in November, I reviewed how global central banks have been working on DLT (Digital Ledger Technology) pilot projects which also meant the use of digital currencies in one form or the other. Here are few of the notable ones to refresh your memory:

Other countries like Iran & Russia have been seriously considering issuing their own CBDC’s by the name of ‘Crypto Rial’ & ‘Crypto Ruble’ respectively, as alternates to their fiat currencies which could help them fight them hegemony of the U.S dollar. Venezuela has already issued its national crypto by the name of Petro. Backed by Oil, the digital currency hasn’t seen the kind of adoption that the government was expecting as people crushed by economic depression have reverted to mainstream cryptos.

The biggest shake-up for the central bankers, in my opinion, came with the launch of Facebook’s Libra. Before this development, the regulators & central banks were resting their hopes on pinning down the decentralized cryptocurrencies under the regulatory umbrella. Libra’s unveiling meant mainstream tech giants like Facebook were interested in stepping into the digital payments arena.

When the biggest social media platform — one with a following of around 2.3 billion people decides to step into the digital payment space, it meant the time had come to give some serious thought to the digital transformation being brought about by blockchain technology in general & Cryptocurrencies in particular.

Recent developments have begun to show that central banks are becoming more receptive to the idea of a CBDC — basically a digital alternative to the fiat currency but under the central authority of the financial institution. This would appear to be a desperate attempt by financial authorities to align themselves with the digital disruption albeit by keeping control over its functioning.

Earlier in April of this year, the International Monetary Fund (IMF) & World Bank (WB) announced the launching of a quasi- cryptocurrency dubbed the “Learning Coin.” However, the Chinese central bank (PBoC) was the first to set the trend towards a serious exploration of digital currency after the trade war between the two biggest economies took a currency dimension in summer when the U.S blamed China for being a currency manipulator.

Here’s how the central banks are coming around to the idea.

The United States has been the most antagonistic to the idea of issuing a CBDC for obvious reasons. The biggest economy controls the financial system of the world with the reserve currency — the American Dollar. It runs the system with its powerful currency. Ask countries like Venezuela & Iran whose economies have been crushed under the weight of American sanctions despite being Oil-rich nations.

Lately, however, the tide seems to be changing. The debate on a blockchain-based digital dollar got going by two former heads of the Commodity Futures Trading Commission (CFTC) in an op-ed published in the Wall Steet Journal. The two pointed out that risks to the supremacy of the Greenback are real as different central banks continue to experiment with CBDCs.

They were of the opinion that the new distributed ledger system holds certain advantages over the current monetary system & the new digital dollar would not only compete with existing cryptocurrencies, but it would also stall the erosion of the dollar’s status as the most popular currency for international exchange.

The Feds, on the other hand, still seem skeptical of the idea. In a letter responding to questions of lawmakers, Federal Reserve Chairman Jerome Powell pointed out that FOMC is aware of other countries exploring the CBDC option and they are analyzing the benefits of issuing one of their own. He said that the Feds are worried about the potential disruptions to the monetary policy, financial stability, regulation & operations, that the issuance of a digital dollar would bring.

This skepticism might not last long with a Chinese CBDC on the horizon.

China has been embracing the blockchain technology recently with comments from President Xi praising the futuristic tech & saying that the country should pounce on this opportunity to advance the digital transformation agenda — cryptocurrencies not so much. The communist regime probably doesn’t want to relinquish any control over monetary matters by allowing mainstream cryptos. A digital Renminbi, however, might become a reality very soon.

While regulators are concerned over privacy issues related to the launch of Libra & disruption to the current monetary system, China’s launching its own CBDC for a whole different reason. It fears that even a limited approval of Libra coin with an ecosystem of 2.5 billion users backed by the U.S dollar will reinforce the hegemony of the Greenback.

China will probably be the first major economy to issue a sovereign digital currency. Although not sure when, but the country is on an accelerated path towards achieving this goal. While the central bank believes the digital version of the fiat currency would give people the ability to be a part of the new digital economy, critics believe the CBDC is being created to provide the authorities with yet another surveillance tool.

Although the authorities have been quick to dispel the notion, it remains to be seen how they will provide the anonymity of physical cash in the digital version of their currency. One way or the other Chinese CBDC is on the way.

French central bank first deputy governor Denis Beau, last week, spoke out in favor of blockchain technology by saying that Eurozone has a responsibility to consider issuing a CBDC of its own as “disorderly approaches and heterogeneous adaptations” —an obvious shot at Libra.

Benoît Cœuré, who has been appointed as the head of the newly established Innovation Hub at the Bank for International Settlements (BIS), will explore the benefits of financial technologies such as a digital currency.

Just like the regional currency Euro, the monetary union seems to be moving towards the creation of unified Eurozone digital currency which leverages the benefits of digital ledger technology. Keep in mind though that ECB had struck down a similar cryptocurrency proposal from Estonia in 2017. It seems like a change of heart this time.

The influential economic block of BRICS — Brazil, Russia, India, China & South Africa which accounts for more than 23% of the World’s GDP is considering issuing cross-national digital money to counter the dependence on the Greenback & the United States. The BRICS business council also discussed the creation of a BRICS payment system, which would replace the current U.S controlled SWIFT payment system.

The countries of the block believe the use of technology would enable them to wield the kind of political and economic influence that they currently lack. Russia wants to reduce dollar dependence & bypass U.S economic sanctions, India wants to fight poverty & corruption while Brazil is the biggest crypto market in Latin America. China & South Africa are actively pursuing the development of their CBDCs to achieve the digitization of their economies.

The two nations of Saudi Arabia & the United Aram Emirates had announced the launch of a common digital currency “ABER” in January of this year. The joint statement by the United Arab Emirates Central Bank (UAECB) & the Saudi Arabian Monetary Authority (SAMA) indicated that the Proof of concept framework of Aber will be used for financial settlements between the Kingdom of Saudi Arabia and UAE through Blockchains and Distributed Ledgers technologies.

With the dwindling fortunes of Oil, the two states are trying to modernize their economies on par with the developed world. A recent meeting of the two heads of states gave the final go-ahead on the digital currency among other initiatives. Keep in mind that Dubai is also attempting to become the first blockchain government by 2020–21.

Although the decentralized cryptocurrencies might not have gotten the legal cover by financial regulators… as yet, they have certainly set the stage for a true digital transformation which has prompted the central banks to think more favorably about the digital assets, their utility & the emerging blockchain tech.